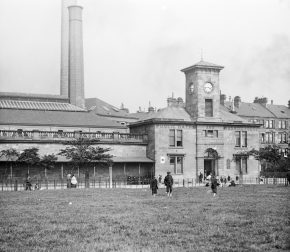 Previously on William Street, Glasgow
John Carrick (1819-1890).
Greenhead was the second public baths built in Scotland, the first being in Dundee. Despite damage and temporary closure during the Second World War the building remained in use until 1960. Greenhead was demolished to make way for an extension to Templeton’s carpet factory. Photo © Glasgow Life.