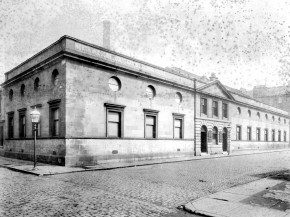 10 Braid Square, Glasgow, G4 9YQ
John Carrick (1819-1890) (refurbishment by Christopher Purslow).
John Carrick designed 5 baths in Glasgow, but North Woodside is the only one to survive. It is built in the conservative Italian Renaissance style he favoured, and its specifications mirrored that of Greenhead. They are Scotland’s oldest operational public baths, and had a utilitarian interior until their refurbishment in 1991. Photo © Glasgow City Archive.