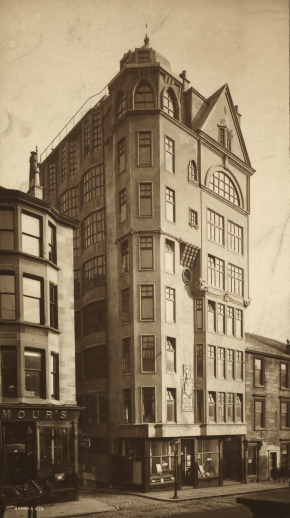 John Gaff Gillespie was born in Glasgow, and attended classes at Glasgow School of Art. In 1889 he won the Glasgow Institute of Architects prize (jointly with Charles Rennie Mackintosh), and was recognised by William Forrest Salmon (Senior). Gillespie joined Salmon’s architectural practice, and became a partner a few years later. In 1903 the firm became Salmon, Son & Gillespie.

Gillespie developed strong working relationship with Salmon’s son – James Salmon Jr. By the early 1900s their style begun to emerge: Gillespieâ€™s work gravitated towards a simplified classic, whilst Salmon’s towards a sculpturesque Art Nouveau. Gillespie later obtained a senior partnership of the firm, as Salmon proved unable to buy out the shares, having spent all his money on extensive international travel. In 1918 Gillespie partnered with William Alexander Kidd, which laid foundations for architectural practice Gillespie Kidd & Coia, known for introducing modernism into the architecture of Scottish churches.