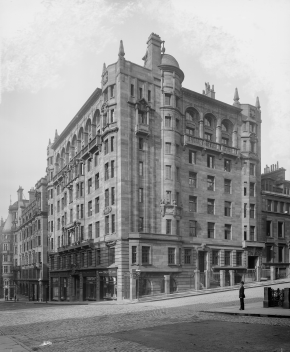 John Archibald Campbell was born in Glasgow, and was privately educated, because of his mother’s frequent travels to Europe. She often took children with her, which resulted in Campbell being fluent in French and German.

He was admitted to Ecole des Beaux Arts in 1880, following in the footsteps of another Glaswegian architect, John James Burnet. He later joined Burnet’s architectural practice, which exerted an influence on Campbell’s early designs. After a ten-year period the practice was consensually dissolved, which led Campbell to establishing himself as one of the city’s leading architects of that time. He never married, remained fond of his travels and was said to have been extraordinarily hospitable. Photo © RCHAMS.