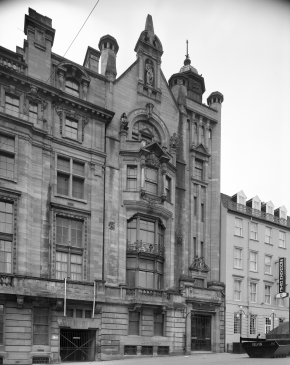 John James Burnet was born in Glasgow, and was intended for studies at the Royal Academy Schools in London. Having won his parents approval, he decided to undertake the education in Ecole des Beaux-Arts in Paris instead. There, he made a life-long friendship with Henri Paul not, whose influence can be seen in Athenaeum Theatre. His French education left him fond of sculptural treatment, and impacted upon his logical approach to architecture.

Burnet gained national recognition in 1886, through winning the commission for the Edinburgh International Exhibition. Soon after, the style of his architectural practice changed significantly, as he strived to adapt to the London scene. This change was first seen at Athenaeum Theatre. Throughout his career, Burnet travelled extensively. He repeatedly took tours of France, Germany and Italy. These trips influenced him to adopt the neo-Baroque style, for which he became widely known. Photo © RCHAMS.