Join us on Wednesday 14th December at 6pm for an exciting double event.

An exhibition and charitable sale of original artwork and prints by our very own Professor Robin Webster OBE RSA FRIAS. 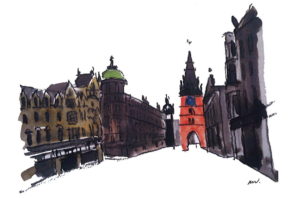 Alasdair Gray once remarked that one of the problems with Glasgow is that there are not enough drawings or paintings that celebrate it. So here is an attempt to remedy this in a small way.

I am motivated by the quality of the city’s architecture, and its large number of listed buildings “at risk” makes me want to encourage more people to appreciate and value it. The work focuses mainly on the large red sandstone buildings in the city centre, built when Glasgow was the wealthy second city of the British Empire, although there are also other images of different buildings in the city.

There are two parts to the works on show: the first is a series of limited edition digital prints in which Robin has manipulated photographs in order to single out and draw to people’s attention the size and impact of the architecture, in the hope that they will look again. These prints retain some of the buildings’ sharpness and details, while emphasising their impact, weight and solidity.

In the second part Robin has explored the flamboyant richness of the city’s built fabric in a freehand and more painterly fashion in a series of original watercolours, encouraging us to appreciate the many qualities of our great city.

Robin is an architect who was born in Glasgow, the twin son of Gordon Webster and grandson of Alf Webster, both well known stained glass artists. He was educated at the University of Cambridge and the Bartlett at UCL. He worked for Gillespie Kidd and Coia architects in Glasgow for a brief period in 1961-62, and ran his own practice in London and Aberdeen until 2005, when he became a partner of cameronwebster architects in Glasgow along with his daughter and son in law. He has taught at Cambridge, the Bartlett, The Mackintosh School of Architecture GSA, Washington University St Louis, and was Professor of Architecture and Head of School at The Scott Sutherland School in the Robert Gordon University Aberdeen from 1984 until 2004. He has drawn and painted all his life.

Explore Glasgow’s rich architectural heritage in your own colours.

Colouring Glasgow is a beautiful adult colouring book of the famous historic landmarks that make up Scotland’s largest city, the world-renowned second city of the Empire. From the ornate churches of Alexander Greek Thomson to the stately magnificence of the City Chambers, this book contains much of Glasgow’s extraordinary architectural heritage.

Adult colouring has become a hugely popular pastime across the world, providing a deeply satisfying leisure activity and route to mindfulness.

Talented illustrator, historian and architectural expert, John R Hume, takes us on a colouring journey across the city, covering all it’s most iconic subjects.

Colouring Glasgow will be available to buy at this launch event ahead of officially going on sale in 2017, with the opportunity to get your copy signed by Prof Hume – the perfect Christmas gift for the architecturally-minded!